Rosacea, also known as acne rosacea, is a chronic skin condition typified by facial redness and pimples. It is most common amongst fair-skinned people of Northwest European descent, but can also affect individuals of other ethnic backgrounds.

It can look unsightly, but luckily, rosacea is primarily a cosmetic condition that causes little harm. Further information can be found in our rosacea information section further down the page. 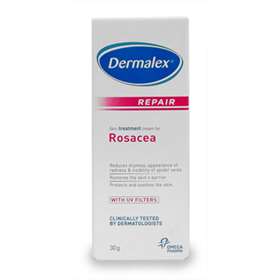 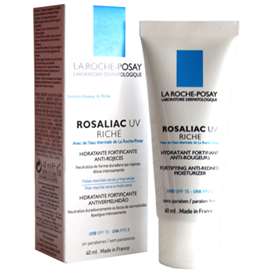 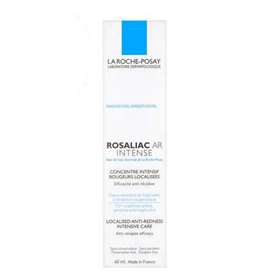 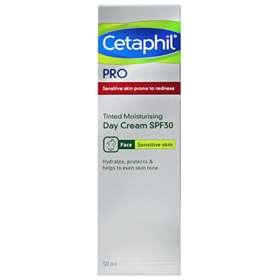 Rosacea is a skin condition that is characterised by facial redness (facial erythema) along with small spots. It affects both sexes, though women are more prone to it than men. Typically, the onset of Rosacea occurs between the ages of 30 and 50. In severe cases of the rosacea, the skin can thicken and become swollen and purple, particularly on the nose, leading to a condition known as rhinophyma.

Unless rosacea affects the eyes, it is generally a harmless condition that can be treated with topical treatments.

What are the symptoms of Rosacea?

The symptoms of rosacea can differ from person to person, with most sufferers experiencing only a few of the possible symptoms, rather than all of them. Rosacea usually begins with episodes of facial flushing that can last for up to 5 minutes and will sometimes be accompanied by an unwelcome sensation of heat. This facial redness occurs primarily on the cheeks, nose and forehead, but can also affect the neck, chest, scalp and ears. The episodes of flushing are sometimes followed by lengthy periods of persistent facial redness.

The development of small spots, papules and pustules is another common symptom of rosacea. These will often develop on the face and have an appearance similar to that of acne, although, luckily, your skin should stay free of blackheads.

Inflamed blood vessels and thickened skin are also common occurrences amongst rosacea sufferers. The inflamed blood vessels in the surface of the skin can be particularly troublesome as they are often visible, giving the skin a blotchy appearance resembling that of a habitual heavy drinker. Thickening of the skin occurs only in the most advanced cases of rosacea and is much more common in men than in women. In such cases the skin, particularly around the nose, thickens and forms excess tissue, creating a ruddy, swollen, bulbous appearance. This condition is known as rhinophyma.

Other symptoms associated with rosacea include; burning and stinging sensations on the face, gritty, bloodshot eyes, dry skin, swelling of the face and patches of raised, red skin.

What are the causes of Rosacea?

At the moment, the exact cause of rosacea remains unknown, but it is thought to be genetic, as instances of the condition appear to run in families. A large number of triggers have been identified for the condition, many of them also playing a part in episodes of facial blushing and flushing. Some of the common triggers of rosacea include; exposure to sunlight, stress, hot weather, wind, bouts of strenuous exercise, hot baths, cold weather, humidity, indoor heating, some cosmetics, medications and certain food stuffs, such as spices, caffeine, alcohol, hot drinks, some meats and dairy products.

How do I prevent Rosacea?

While it isn't possible to prevent an initial attack of rosacea, it is possible to avoid future flare-ups. Learning to recognise and avoid the triggers is key. Avoiding known triggers can lead to a reduction in the severity and frequency of which you experience the symptoms of the condition. So, depending on your triggers, try to; steer clear of foods known to aggravate the condition, minimise exposure to the sun (wear a high strength sunscreen when this can't be avoided), reduce stress levels and wrap up well in cold weather.

How do I treat Rosacea?